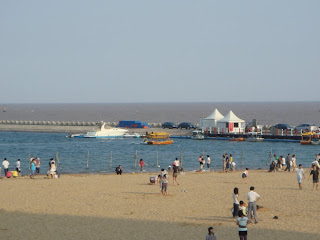 Jinshanwei beach
One day in May, I went to a beach called Jinshanwei 金山卫 with Stephen and Morgane, located two-hours South of Shanghai.

We were so craving about the beach, because temperature was already very high in May. As you may wonder, Jinshanwei is not a natural beach but it's ok, at least we were on the sand. You can see on my pic that they separed the natural sea (look at this grey sea on the back of the beach!! yes this is normal color of the sea!) and the treated sea (much nicer color, isn't it?)
Although, the part of the beach we went to, couldn't swim, they've put some lines preventing, probably other parts of the beach you can swim. There are jet-ski, boats, bicycles with 3 seats...and most of the Chinese who came with their tent and kept their clothes on (because you know, they come to the beach but don't want to get tanned!). It was funny, because we were the only ones to wear a swim-suit (except another the only other couple of foreigners), so we spotted a dozen Chinese trying to take a picture of us, prentending they were photographing the sea. haha.


Direction: at Shanghai South West Bus station, near Shanghai South Railway Metro Station 上海南站, line 1, take the bus 上石线 , ticket costs 10RMB and lasts about 1h45-2hours. This bus leaves at sharp time, i.e. 12pm, 1pm...This bus is also stopping at the bus stop in front of Lianhua metro Station, line 1, maybe more convenient.
Jinshanwei is the last stop (everybody gets off there anyway) called 石化汽车站, then the beach is at walking distance 500 meters and free.
A bus map here -> http://www.ddmap.com/mstmap50007/g_sch_bus.jsp?buskeyname=%C9%CF%CA%AF%CF%DF&mapno=21&schtype=1
Posted by Stéphanie at 12:28